VOSH-Connecticut held its seventeenth annual eye care clinic in San Juan del Sur, Nicaragua on January 10-18, 2020. This was the twentieth year of service at this site to the San Juan del Sur area, the seventeenth under the auspices of VOSH-Connecticut, along with three previous missions under the auspices of VOSH-NECO. The team consisted of 35 mission members, per below. 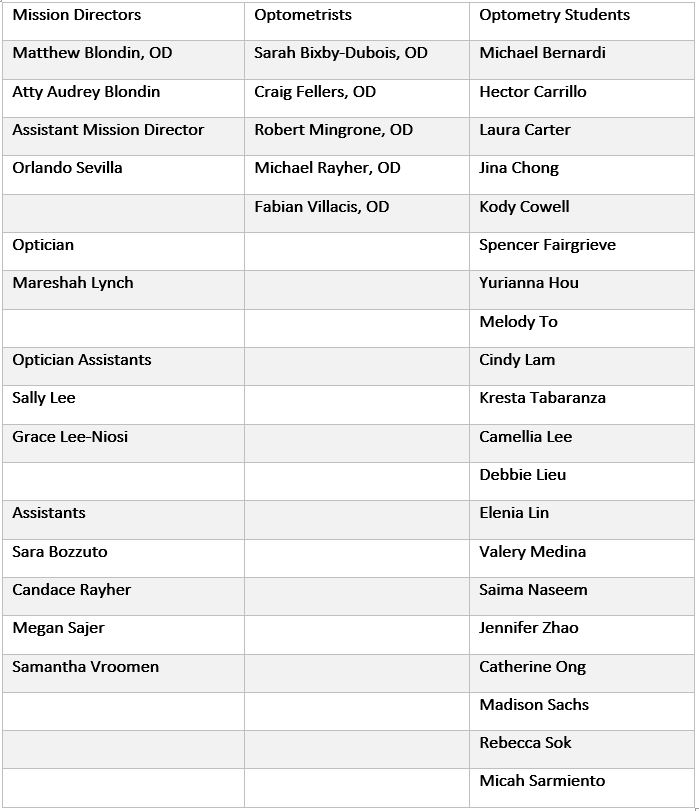 In addition to patients seen in and around the San Juan del Sur area, the following buses organized by Orlando Sevilla and Dra. Rosa Elena Bello provided patients all 4 days at a cost of $4,435. 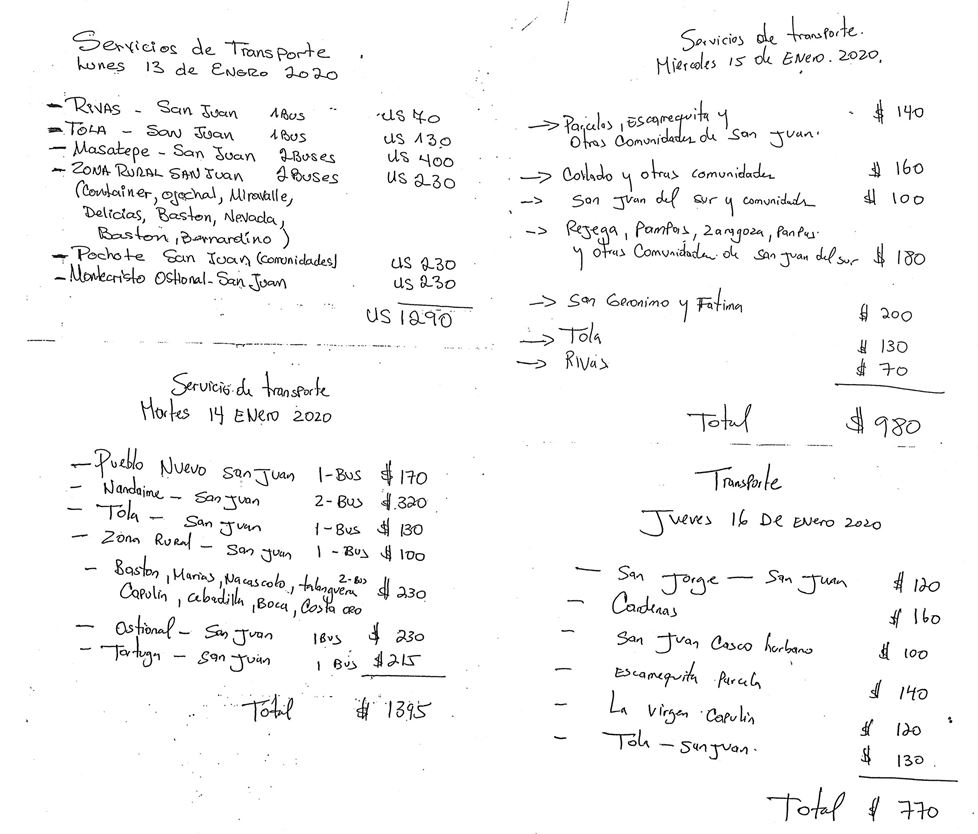 As in years past, approximately 70 local volunteers assisted with the mission. Dra. Rosa Elena Bello supervised the mission and the local volunteers as she has done for the past 20 years, and many local volunteers were now able to assist throughout the mission as translators, where we were also helped by new mission member Dr. Fabian Villacis who speaks fluent Spanish. The mission was challenging as we saw almost as many patients in 2020 as we had seen in our last mission in 2018 with half of the mission volunteers that we had been with us previously. This was especially challenging for the students who did an extraordinary job led by Student Leader Laura Carter in providing great patient care and services, as well as our new OD’s Dr. Sarah Bixby-Dubois and Dr. Craig Fellers and pre-optometry student Megan Sajer who worked so hard pretesting hundreds of patients and generally helping out as needed in Clinic 5.

In addition to the 3,300 pairs of glasses purchased by VOSH-Connecticut from the Virginia Lions Club, 4,000 pairs of sunglasses & 1,000 pairs of readers were purchased by VOSH-CT. The dispensary once again was run very organized and efficiently by long-time VOSH-CT member Optician Mareshah Lynch and another long-time VOSH-CT member Chief Dispensary Assistant Sally Lee and her daughter Grace Lee-Niosi, along with volunteers Sarah Bozzuto, Candace Rayher and Samantha Vroomen. More than 500 pairs of brand new eyeglasses were made thanks to long time mission member Dr. Robert Mingrone and other Connecticut OD’s, as well as another 50 pairs of varying prescriptions which were also made by our personal office staff and brought along, which was very helpful and useful in the dispensary. Mareshah Lynch with the help of Henry Mann at Eye care of Maine edged another 250 pairs of glasses and a donation of 500 microfiber cloths were donated to the mission from Ron’s Optical in California and beautiful handmade eye glass cases were donated by Raema Robertson.

As we started a number of years ago, each mission member was asked to transport one supply bag and most mission members as part of the transport team arrived in Managua on the same day & time per our request to assure that everything got through at one time. There continues to be no choice but to mandate that anyone transporting a bag must arrive with the group or whatever they have will be taken at customs, which again presented a problem as 2 students arrived earlier than the group and attempted to go through customs at which point their trial lens sets were immediately confiscated necessitating over an hour of negotiation to finally get them released. In addition, the majority of the group arrived in Managua on January 10th at 12:15 p.m. and MINSA approval was not granted until 12:41 p.m., which also made it more difficult to timely proceed through customs and depart.

We also continued to receive excellent service from Richard Morales, owner of Gaby Transport, along with his drivers and helpers. Richard and his company provided safe and reliable transportation services to the group and its members throughout the mission, and we are very grateful for everything Richard did to help out on our behalf. We are also appreciative of the help provided by Richard and his wife Ruth in assisting us with needed mission supplies, tables and chairs for the clinic, along with the delicious baked goods and cakes from Ruth’s sister, Mirna Perez. In addition, Roger Mahieu, Jr., owner of True Value of Litchfield, once again donated 100 nail bags which were distributed to mission members and volunteers and used to hold eye glasses and sunglasses, and we are most appreciative of his continued kindness and generosity and support of our mission. We also continue to acknowledge and appreciate the tremendous amount of work our office assistant, Nicole Gaynor, as well as our foster son Orlando Sevilla, do each year throughout the year in preparation for the mission. Several mission members stayed at the Hotel Victoriano which was very nice, and the student group stayed at the Hotel Gran Oceano which also worked out very well with the exception of confusion over the hotel bill payment which was eventually worked out. We also experienced intermittent power outages throughout the week due to extremely high winds and blowing dirt and dust, which brought challenges to the clinic with limited lighting trying to see patients after dark with the entire town in a blackout on Monday evening.

The clinic was held for the twentieth year at the Centro Escolar Enmanuel Mongalo y Rubio. It was set up Sunday, January 12th, 2020 with 6 examination rooms, a dispensary & lunchroom.The clinic officially opened on Monday, January 13th, 2020 at 8:00 a.m. Breakfast was provided each day by VOSH-Connecticut beginning at 7:00 a.m. Patients were seen from 8 a.m.-1 p.m., with a break for lunch provided by VOSH-Connecticut from 1:00-2:00 p.m. Clinic then resumed from 2:00-dark. As in the past, VOSH-Connecticut provided for all expenses for both mission members and local volunteers relating to the clinic including breakfast, snack, lunch, at a cost to VOSH-CT of $1,800 for the 4-day mission. Marina and her family and staff did their usual wonderful job of cooking and providing all of the food and food services as she and they have done for the past 20 years and Marina was also very grateful for the new shoes I was able to give her as well as for our night watchman. Certificates of appreciation and participation were given to all participating mission members. Our veteran security teams returned once again, providing great service to the clinic and all participants throughout the week. Group pictures were taken on Wednesday and a very nice dinner El Cubana Restaurant for the mission volunteers was held on Thursday evening.

Numerous drugs were requested and donated from Alcon Laboratories, Inc. and Allergan Pharmaceutical., which were very useful and helpful to the patients throughout the mission. We have also continued our relationship with the Norwalk, CT Sister Cities program under the direction of Tish Gibbs, who once again provided a bus this year from Nagarote which all worked very well. In addition, Katie Brugger once again interviewed us for a mission video for which we are very grateful, but it was interesting that we received no other type of media coverage as we had in years’ past.

Escalating mission costs continue to present a challenge. Total mission expenditures now exceed $15,000 per mission, funded solely through volunteer donations solicited primarily by myself through the CAO, as well as through our yearly mission fees and the generosity of our close friends and associates. We continue to be appreciative of the generosity of the members of the CAO and others, as well as our mission members, who give so generously not only of their time but financially as well. In addition, our new mission member Dr. Michael Rayher from Branford, CT personally raised and donated almost $1,500 towards our mission costs for which we were very grateful and appreciative. Distribution and baggage reimbursement fees exceeded $2,000 for this mission which will have to be factored into for the future as mission costs continue to escalate and despite requests most mission members are unable to personally absorb these mission baggage and transport costs.

San Juan del Sur and the surrounding areas have experienced great economic difficulty and challenges over the past 2 years, and the need for eyecare was even greater since we were unable to attend to our annual clinic January 2019. Despite the State Department Level 3 Security Alert we were able to provide services this year without incident although we did witness at least 2 large crowd demonstration groups during our time there. In addition, I was detained twice by security for “random security checks” while trying to depart.

VOSH-CT continues to be grateful to all of those, both here and in Nicaragua, who work together as one to provide eye care services to so many who otherwise would have none.